To Command and Collar by Cherise Sinclair 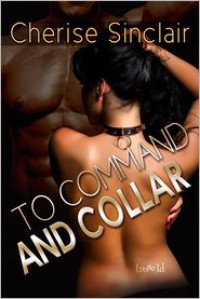 The first five books in the series have followed a very similar dynamic between the characters - a D/s relationship that involved mostly the power exchange to occur during play, during sex. I admit that's the dynamic that I'm most comfortable with, but what I learned in this book is that Cherise Sinclair can easily make me understand other dynamics that I may not have understood so well before. In To Command and Collar we get to explore the dynamic of a full-time Master/slave (and I have to add how much I hate that word) relationship.

This is a 24/7 power exchange, and I can't explain it nearly as well as this book does. Kimberly needs the security of the rules and position, Raoul needs the security and satisfaction of caring for her that much. Before reading this I never would have understood why a woman, or anyone, would want to give up that much control in their life. It sounded too much like slavery to me. But I learned different. As Kimberly struggled with her needs to submit, I began to understand much more too. Living in this lifestyle didn't detract from her, it made her stronger.

Now, Kimberly was coming out of a horrific, true slavery experience. She had been kidnapped, trained - read beaten and raped - and sold. When she tried to kill her 'Master', she was returned to the slavers on death's doorstep. But she survived. She endured and came out the other side, still determined to try to escape. Kim didn't have much hope that she actually would escape, but she was going to try - no matter what. I admired her so, so much. Even if I did think her recovery was a bit quick. However, I took this in pure escapist reading and didn't allow my mind to settle on it too terribly long. We've seen a lot of issues get worked through by Doms and their subs, and though these were a bit more extreme, that's what we see here too.

Raoul, I genuinely liked. He cared, and fell deeper for Kim than he even meant to. Circumstance and determination to take the slavers down threw them together for a trial-by-fire. And they pulled each other through it. I hurt for some of the things he had to do in order to both help Kimberly and to make the ruse believable. He really struggled with the roles they were assigned.

Overall, the believability of Kim's healing kept this from being a higher rating, but I greatly enjoyed To Command and Collar. Ms. Sinclair continues to test my comfort levels - Master Sam, the sadist is up next - and always gives me something to look forward to. I re-read these books a lot, because they're sexy, fun, and have great characters.